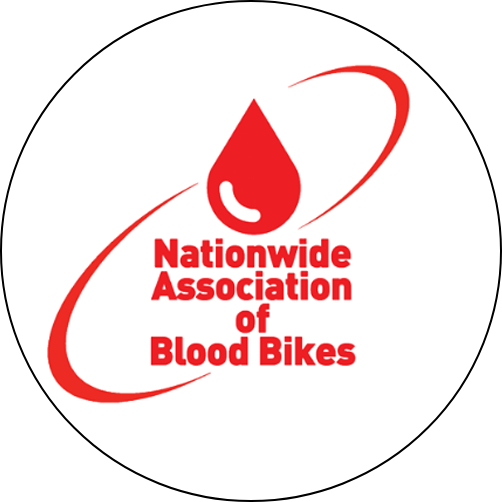 One day, we may well have the ride of your life...

“As well as providing an essential conduit for the sharing of ideas and best practice between member groups, NABB plays a key role in helping to bring ‘professional’ standards and national recognition to our cause”

“Blood Bikes Wales has benefitted enormously from NABB’s successful negotiations with the Treasury in gaining VAT and Road Tax exemption. We are extremely grateful for the various other advantages of being a member of this umbrella body.”

“Cornwall Blood Bikes have been proud members of NABB since our founding days, our team wearing the NABB logo on our jackets with pride, knowing we are part of a nationwide Blood Bike family. Through the years they have offered support and assistance, working to improve the professional standards we feel all Blood Bike groups should be working towards. They have supported us in areas such as VAT reclaim, free vehicle tax, insurance, and discounted PPE, which has improved our service to our NHS partners and the community as a whole. Being a member of NABB has benefited Cornwall Blood Bikes both financially and in making our charity into the professional organisation we now are. NABB staff have always responded to our questions and comments quickly, professionally, and offered guidance and assistance where needed, giving a once small group a larger voice in dealing with the NHS and the government.”

"Whiteknights Yorkshire Blood Bikes hugely appreciates the continuing work of NABB to represent and promote the work of Blood Bike Charities in the UK. We appreciate overcoming the challenging obstacles and the contributions NABB personnel make to the complex Motorcycle Type Approval process for Blood Bike Motorcycles. NABB lobby on behalf of the membership groups at a national level with our stakeholders which is invaluable – in addition to negotiating financial discounts and special offers for member groups and individuals of those Blood Bike charities.The recent tireless campaigning for the exemption of Vehicle Excess Duty to Blood Bike Charity vehicles was a huge success and a real breakthrough – thank you NABB.
May we, as independent Blood Bike Charities by coming together through NABB, go from strength to strength."

“You and NABB have spent many years representing bloodbikers as one group, raising awareness, identifying ways to help its member groups and acting on their behalf, regardless of their affiliation.
As an independent charity we have operated for ten years outside the NABB group. Our reason for not joining was that we wanted to maintain our autonomy whilst delivering a high standard of service in line with NABB’s goals and aspirations.  NABB respected that; the contact we maintained was always welcomed and we have never felt isolated or excluded.
That inclusion has meant that we have recently benefitted from grants, discounts and offers procured by NABB so, assured that the autonomy we sought would not be compromised, we felt we should become affiliated to the group that has demonstrated it can successfully represent all its member groups in sharing standards, support and best practices as one organisation.
On behalf of everyone at SERV Suffolk and Cambridgeshire, thank you.”

“The Nationwide Association of Blood Bikes (NABB) were outstanding, especially the Development officer at that time – they supplied us with the knowledge and sample procedures to support us in our infancy, and helped us at every step of the way, so much so I joined their committee and lent my support to other new groups when I could.”

"Without a doubt NABB was crucial to the implementation and success of the Lincolnshire Emergency Blood Bikes Service (LEBBS) becoming operational in April 2013. They provided expert advice and guidance to help us get started and have continued to support us as we’ve grown over the years.
NABB provides an overarching level of minimum standards that all blood bike groups should aspire to achieve, ensuring a safe and professional service is provided to the NHS.
NABB also lobbies on our behalf for the wider recognition of blood bikes and all that we do, often securing huge discounts and savings for our charity.
Thanks to all at NABB. Keep up the good work.”

“We have been members of NABB since our inception in 2012 and have found the organisation to be fundamental to our existence and development. Aside from supporting us in our starting up, the things we have benefitted from include;
involvement in the National Blood Bike Day each year, VAT Rebate, large Masonic donations through and with the support of NABB, VEL exemption to all of our vehicles, AA Membership for all of our vehicles, preferential treatment at many locations due to the negotiation of NABB, procurement of new 'type-approved' motorcycles through NABB. We are very grateful for the support offered by and through NABB in our time, including the support in national relay work.”

As one of the founding member groups of NABB in 2008, it has been fantastic to watch NABB flourish by fulfilling its objective to help share best practise whilst understanding the differing regional requirements for the small number of groups that existed at that time, then by continuing to raise awareness and help drive the reach of the blood bike voluntary services on offer across the UK acting as a key central contact point for expert guidance. It has been a pleasure to support NABB and watch the evolution of itself with all the new groups that have since setup and continue to work together seamlessly.
Although in 2020 we celebrate our own 30th anniversary as a blood bike charity, during the last 10 years with NABB we have continued to develop and gain new skills, updates on technology, benefited from shared volume discounts, bike manufacturer consistency for our fleet, gained insight to changes in health industry practise so we could adapt proactively, plus of course NABB are a recognised voice representing all blood bike groups and able to drive key decisions in government legislation including VAT and Fuel exemptions in recent years.
Freewheelers EVS had already achieved the QAVS recognition back in 2008 when it attended the very first NABB meeting, it is great to see many of our Blood bike group family also receiving that same level of recognition through adopting NABB best practises and following the underlying principles that ensure all volunteers across the NABB blood bike groups deliver a safe, efficient and professional service for their NHS partners.
Thank you NABB

During the 5+ years Dumfries & Galloway Blood Bikes have been in existence we have been grateful to be a member of NABB, initially for guidance as we were setting up, & for the ongoing work that as our umbrella organisation NABB continues with. Negotiating exemption from road tax for our fleet vehicles & the free fuel from BP being two recent examples.
There are clear benefits to being part of the larger picture. Many thanks NABB, from north of the border.

NABB today is acknowledged as the true representative of the Blood Bikes community in the United Kingdom. NABB has, over the years, achieved several land marks. Notably the certification by a leading motorcycle manufacturer of a Blood Bike specific motorcycle, obtaining exemption from road fund licence and VAT for all Blood Bike Groups in the United Kingdom.
Through the efforts of NABB the Blood Bike Community today is fully accepted as an Emergency service alongside the other emergency services.

NABB has proved to be an exceptional organisation in support of all operational Blood Bike groups.
As members SERV Sussex has been able to benefit from the work NABB has done including AA cover for fleet vehicles, VAT and VED allowances and the establishment of “type approved” motorcycles for our operations.
The work undertaken in assisting new groups to become established in a professional and efficient manner has ensured that long standing groups experience has been shared and good practice has been maintained.
NABB continues to support and champion the efforts and reputations that have been earned by the Blood Bike community.